In 1984, a young man named Malcolm graduated from the University of Toronto and moved to the United States to try his hand at journalism. Thanks to his uncommonly clear writing style and keen eye for a story, he quickly landed a job at The Washington Post. After less than a decade at The Post, he moved up to the pinnacle of literary journalism, The New Yorker. There, he wrote articles full of big ideas about the hidden patterns of ordinary life, which then became grist for two No. 1 best-selling books. In the vast world of nonfiction writing, he is as close to a singular talent as exists today. 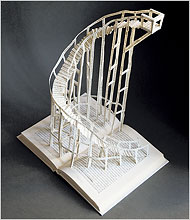 Or at least that’s one version of the story of Malcolm Gladwell. Here is another:

In 1984, a young man named Malcolm graduated from the University of Toronto and moved to the United States to try his hand at journalism. No one could know it then, but he arrived with nearly the perfect background for his time. His mother was a psychotherapist and his father a mathematician. Their professions pointed young Malcolm toward the behavioral sciences, whose popularity would explode in the 1990s. His mother also just happened to be a writer on the side. So unlike most children of mathematicians and therapists, he came to learn, as he would later recall, “that there is beauty in saying something clearly and simply.” As a journalist, he plumbed the behavioral research for optimistic lessons about the human condition, and he found an eager audience during the heady, proudly geeky ’90s. His first book, “The Tipping Point,” was published in March 2000, just days before the Nasdaq peaked.

These two stories about Gladwell are both true,

and yet they are also very different. The first personalizes his success. It is the classically American version of his career, in that it gives individual characteristics — talent, hard work, Horatio Alger-like pluck — the starring role. The second version doesn’t necessarily deny these characteristics, but it does sublimate them. The protagonist is not a singularly talented person who took advantage of opportunities. He is instead a talented person who took advantage of singular opportunities.

Gladwell’s latest book, “Outliers,” is a passionate argument for taking the second version of the story more seriously than we now do. “It is not the brightest who succeed,” Gladwell writes. “Nor is success simply the sum of the decisions and efforts we make on our own behalf. It is, rather, a gift. Outliers are those who have been given opportunities — and who have had the strength and presence of mind to seize them.”

He doesn’t actually tell his own life story in the book. (But he lurks offstage, since he does describe the arc of his mother’s Jamaican family.) Instead, he tells other success stories, often using the device of back-to-back narratives. He starts with a tale of individual greatness, about the Beatles or the titans of Silicon Valley or the enormously successful generation of New York Jews born in the early 20th century. Then he adds details that undercut that tale.

So Bill Gates is introduced as a young computer programmer from Seattle whose brilliance and ambition outshine the brilliance and ambition of the thousands of other young programmers. But then Gladwell takes us back to Seattle, and we discover that Gates’s high school happened to have a computer club when almost no other high schools did. He then lucked into the opportunity to use the computers at the University of Washington, for hours on end. By the time he turned 20, he had spent well more than 10,000 hours as a programmer.

At the end of this revisionist tale, Gladwell asks Gates himself how many other teenagers in the world had as much experience as he had by the early 1970s. “If there were 50 in the world, I’d be stunned,” Gates says. “I had a better exposure to software development at a young age than I think anyone did in that period of time, and all because of an incredibly lucky series of events.” Gates’s talent and drive were surely unusual. But Gladwell suggests that his opportunities may have been even more so.

Many people, I think, have an instinctual understanding of this idea (even if Gladwell, in the interest of setting his thesis against conventional wisdom, doesn’t say so). That’s why parents spend so much time worrying about what school their child attends. They don’t really believe the child is so infused with greatness that he or she can overcome a bad school, or even an average one. And yet when they look back years later on their child’s success — or their own — they tend toward explanations that focus on the individual. Devastatingly, if cheerfully, Gladwell exposes the flaws in these success stories we tell ourselves.

The book’s first chapter explores the anomaly of hockey players’ birthdays. In many of the best leagues in the world, amateur or professional, roughly 40 percent of the players were born in January, February or March, while only 10 percent were born in October, November or December. It’s a profoundly strange pattern, with a simple explanation. The cutoff birth date for many youth hockey leagues is Jan. 1. So the children born in the first three months of the year are just a little older, bigger and stronger than their peers. These older children are then funneled into all-star teams that offer the best, most intense training. By the time they become teenagers, their random initial advantage has turned into a real one.

At the championship game of the top Canadian junior league, Gladwell interviews the father of one player born on Jan. 4. More than half of the players on his team — the Medicine Hat Tigers — were born in January, February or March. But when Gladwell asks the father to explain his son’s success, the calendar has nothing to do with it. He instead mentions passion, talent and hard work — before adding, as an aside, that the boy was always big for his age. Just imagine, Gladwell writes, if Canada created another youth hockey league for children born in the second half of the year. It would one day find itself with twice as many great hockey players.

“Outliers” has much in common with Gladwell’s earlier work. It is a pleasure to read and leaves you mulling over its inventive theories for days afterward. It also, unfortunately, avoids grappling in a few instances with research that casts doubt on those theories. (Gladwell argues that relatively older children excel not only at hockey but also in the classroom. The research on this issue, however, is decidedly mixed.) This is a particular shame, because it would be a delight to watch someone of his intellect and clarity make sense of seemingly conflicting claims.

For all these similarities, though, “Outliers” represents a new kind of book for Gladwell. “The Tipping Point” and “Blink,” his second book, were a mixture of social psychology, marketing and even a bit of self-help. “Outliers” is far more political. It is almost a manifesto. “We look at the young Bill Gates and marvel that our world allowed that 13-year-old to become a fabulously successful entrepreneur,” he writes at the end. “But that’s the wrong lesson. Our world only allowed one 13-year-old unlimited access to a time-sharing terminal in 1968. If a million teenagers had been given the same opportunity, how many more Microsofts would we have today?”

After a decade — and, really, a generation — in which this country has done fairly little to build up the institutions that can foster success, Gladwell is urging us to rethink. Once again, his timing may prove to be pretty good.

David Leonhardt is an economics columnist for The Times.